Akademie Street Boutique Hotel offers a delicious MCC and a selection of carefully curated local Franschhoek wines under their own label.

Whether you’re the sort of wine enthusiast whose private cellar would make Robert Parker envious, or you simply enjoy a glass with your dinner but couldn’t discern a Pinot Grigio from a Chardonnay, the Franschhoek valley’s selection of wines caters to everyone’s taste. As you drive towards the town you’ll notice that many of the farms still bear their original French names, the word ‘Franschhoek’, of course, meaning ‘French Corner.’ When the Edict of Nantes was revoked by King Louis XIV in 1867, some 200 French citizens fled to the Cape to escape religious persecution. 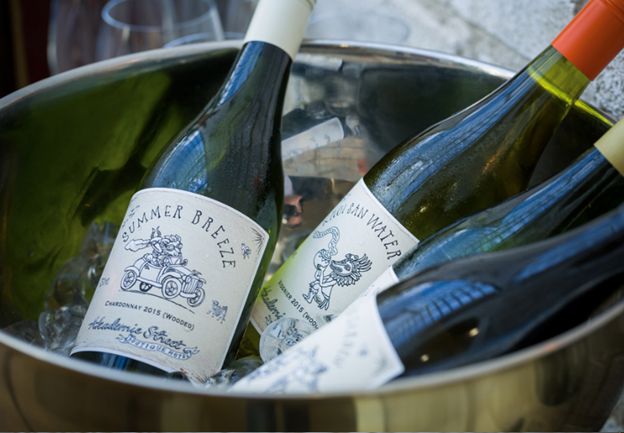 While it is commonly believed that it was these refugees who introduced wine-making to the Cape, in truth, Jan van Riebeeck was South Africa’s first wine-maker. Records indicate that grapes were grown as early as the 1650s, and wine was being produced decades prior to their arrival. By the 1660s the Cape even had a leading wine-maker, Jacob Cornelisz van Rosendael, whose wines were described as ‘tasty, pleasant and delicate.’ However, there was a tendency amongst farmers at the time to use dirty barrels and harvest unripe grapes which led to some of the wines being unpleasantly harsh in character. This displeased wine-loving governor Simon van der Stel to the extent that be began imposing fines on the offending growers.

Van der Stel must have been delighted to learn that, amongst the French citizens headed for the Cape, were vine cultivators as well as those who were skilled in the manufacture of brandy and vinegar. Viticulture, after all, requires a particular knowledge and is different to other types of farming. Unquestionably, these European arrivals can be credited with the evolution and refinement of wine-making in South Africa, and the legacy they left behind is evident. Today, Franschhoek boasts some of the finest and most sophisticated wine-making operations in the country, as well as some of the most beautifully situated farms in the world.

Visitors who want to improve their knowledge of wine and wine-making can embark on some very interesting and informative tours, tasting wine in its various stages and learning about the fundamentals of terroir and the importance of balance. For connoiseurs looking for something specialised and different, there are several quaint boutique wineries offering unique, distinctive wines to take home for your private cellar and enjoy with friends while you share tales of your travels in Africa. Wine that comes with a story is much more fun than anything you can buy in a store or online. Spend a few days sampling the Cape’s splendid selection. You’ll be sure to find a few favourites.